The map of Vietnam shows off the Red river delta to the north and Mekong river delta to the south that is put up together by a central spine of rugged mountains sharing border with Laos and Cambodia to the west. This long and skinny country inherits a number of 2,135 miles long of coastline that stretch the East Vietnam Sea. An impactful history with the neighboring Chinese plus a hundred years under colonial French and the surviving Vietnam War, the country has enriched its collection of any single adaptive cultures and cuisines as it owns today. Travelers are often astonished by the Vietnam’s geographic and traditional customs’ diversity when they find remote mountain markets frequented by ethnic minority peoples, vibrant cafés and art galleries in the cities, serene views of green paddy fields in the lowlands, rich collection of flora and fauna species in numerous National Parks and endless stretches of unspoilt beaches. If asked to negotiate which to skip or put in to the itinerary, it’s hard to work out. So let’s take time to capture all. 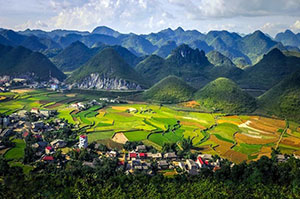 Ha Giang is a province to the very northern tip of Vietnam, bordering with China. It’s known for its forested limestone and granite mountains. Its center town, also called Ha Giang, sits on the Lô river and is under a strong urban sprawl. However, Ha Giang town is a good base for your adventure to Quản Bạ Valley hills, also known as Heaven’s Gate for its panoramic views over terraced rice fields, the amazing Rock Plateu of Dong Van, the magnificent Ma Pi Leng pass or the age old but beautiful & colorful Sunday market in Meo Vac where you can interact with wonderful minority people. 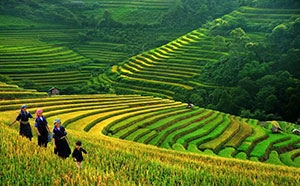 Set high in Vietnam’s Northeast mountains, the town of Sapa offers spectacular views of jagged mountain ridges, terraced rice paddies and green valleys inhabited by people of various minority groups, all of whom congregate in Sapa’s colorful market. Each group has its own distinctive style of dress and makeup. From early childhood, girls learn to grow and weave hemp, to dye cloth with indigo, to sew the family’s clothes, and to decorate items with traditional embroidery motiffs. This breathtaking moutanin resort area is always a dreaming destination for honeymooners and photography lovers. 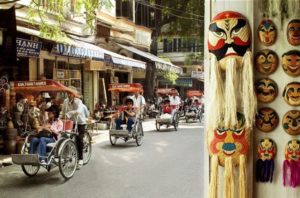 In the spring 1010, Emperor Ly Thai To founded his capital, which he figured ‘Rising Dragon’, on the banks of the Red river. Almost a thousand year later, Hanoi remains Vietnam’s political centre with its crowded streets lined with reminders of its long and tumultuous history, a both gracious but growing city. You’ll find the Temple of Literature, a bastion of Confucian scholarship founded in 1070, an Old Quarter of winding alleys, traditional shop-houses and crowded markets; tree-lined avenues flanked by imposing French colonial villas and the Soviet-style mausoleum built in honor of the man who led the country to independence, Ho Chi Minh. 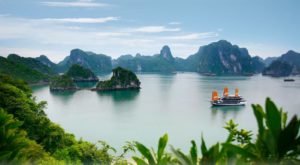 More than 3,000 limestone islands rise from the emerald waters of HaLong Bay, an archipelago that lies over 100 miles from Hanoi. Declared a World Heritage Site by UNESCO in 1994, Ha Long Bay is always a naturalist’s dream. Sculpted into owesome shapes by the wind and weather, the islands hide deserted beaches, many magnificent caves, and hidden lagoons that may only be reached by kayaking through the reclining cliffs which revealed at low tide. A superb seafood lunch on board or sunbathing on the sundesk while the wind keeps leeking into your skin is always deserving a lifetime moment to any traveler. 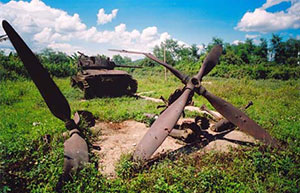 Locate in the heart-shaped Muong Thanh valley near the Laos border, Dien Bien Phu is one of the remote parts of Vietnam. The valley is surrounded by steep forested hills inhabited by many hill tribes, notably the Thai and H’mong. Dien Bien Phu was the battle ground of fierce military events with the French that makes General Giap to be the world reputable. Dien Bien Phu now bears few scars of its past except for the occasional rusty tank and its remote and as yet relatively untapped by tourism. The hill tribes living around the area of Dien Bien Phu make up 70% of the region’s population, and the ethnic minority groups include the Northern Tai (Tai Dam and Tai Kao) Nung, H’mong with a few others. 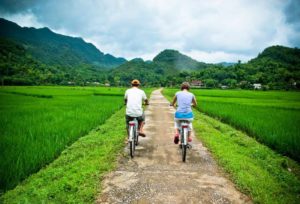 Less than three hours drive to the west of Hanoi is the most beautiful valley in the northern mountain area of Vietnam. This is where Thai ethic minority group is located in and around Hoa Binh province. Coming here traveler can enjoy the unique experience of home-stay in the traditional stilt-houses of Thai people. You can interact closely with the local family you staying with and their very friendly neighbors. The whole valley is filled up with green carpets of rice plants which travelers can smell and touch or hands on working with the local farmers. This is a place full of unforgettable experiences. 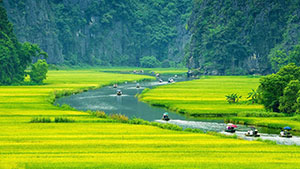 Lies off 70 miles to the south of Hanoi, NinhBinh shows off endless flat green rice fields and a scenic limestone mountain range. Deserving a day trip with a variety of interests, traveler can glide a sampan ride on TamCoc or Trang An, the so-called Halong Bay inland, or commit a pilgrimage to HoaLu, the ancient capital of Vietnam with the surviving aged old Dinh & Le temples. You can extend your drive to Phat Diem stone church, a masterpiece of Catholic people in Vietnam by the end of 19 century. And last but not least, you can plan a memorable hike in the green paradise of the biggest National Park named Cuc Phuong. 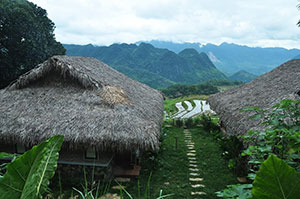 Stretching from Mai Chau to Cuc Phuong National Park, Pu Luong Nature Reserve will attract you with its outstanding beauty and biodiversity along with minorities ethnic’s cultural values & hospitable people. While nature has endowed this land with rich forest and limestone panoramas, it is the local’s works during thousands of year that turned the mountain slopes to alluring terrace rice fields. An interesting combination of natural and man-made influence makes this breathtaking scenery become an ideal choice for a short escape from Hanoi or in a combined journey in several days to Ninh Binh – Trang An and Ha long Bay as well. 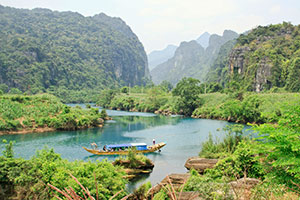 Quang Binh is a province in central Vietnam, bordering Laos to the west and the coastal Vietnam to the east. The capital Đong Hoi is known for the remains of its star-shaped 19th-century citadel and the long sandy stretch of Nhat Le beach. Quang Binh is home to the fame Phong Nha-Ke Bang National Park, featuring mountainous jungle and many limestone caves including the world famous and massive Sơn Đoong Cave. The Kong – Skull Island movie in late 2016 has been filmed partly from this amazing site. 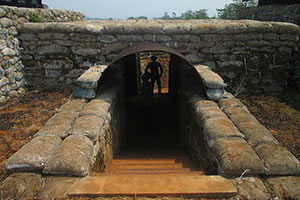 This demilitarized zone saw many of the heaviest fighting during the Vietnam War. On the then southern side, the Americans established a number of bases running the length of the 17th parallel to encounter North Vietnamese infiltrations. Firebases LangVay, KheSanh, ConThien and others were once scenes of fierce fighting and still be recalled by the survivors today. At present, some 30 years later, the DMZ is somewhat negatively left with cratered landscapes, shell casings and even the old tank. These sites are always with much of interest for the veteran who might search for some of the dog-tags somewhere around unearthed. 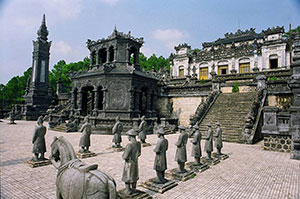 While imperial rule ended over six decades ago, the central city of Hue still bears the marks of its royal past. From 1802 to 1945, Hue was home to 13 Nguyen Emperors, whose palaces and tombs provide fascinating glimpses into the luxurious and secretive world of the court. Visitors may explore the red-lacquered pavilions of the Citadel, walk around the park style royal tomb of the Kings, take an evening boat cruise on the Perfume river accompanied by a troupe of musicians performing courtly love songs, or feast on delicacies once served in the royal palaces. 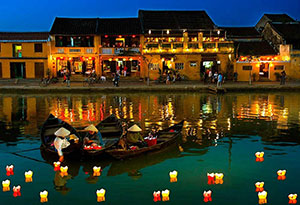 Set near the coast in central Vietnam, from the 16th to 19th centuries the riverside town of HoiAn once drew merchants from as far as Japan, India, Indonesia and Europe who bought the area’s silk, spices and porcelain. A Japanese district and a Chinese quarter were built, to be later joined by a French district. What makes HoiAn remarkable today is that its town centre has been beautifully preserved, the streets still lined with old tile-roofed shop-houses, shady pagodas and colorful communal halls. Declared a World Heritage Site by UNESCO in 2001, this little town is remarked as a living museum which welcome by the most hospitable locals. 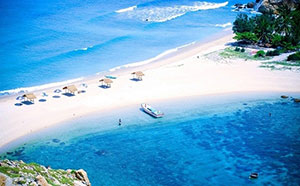 Located in central Vietnam, the sun-washed town of Nha Trang hugs a four miles long stretch of white sand beach, making this a perfect place to get a dose of sun, surf and fresh seafood. Clear blue seas dotted with offshore islands offer excellent opportunities for diving, fishing and snorkelling, while the town itself is home to some interesting sight seeings, including a massive white Buddha statue and a cluster of Cham towers built between the 7th and 12th centuries. For a truly mud-dirt pleasure, Nha Trang offers the mineral mud baths which warmed up by the natural hot spring, you’ve got it! 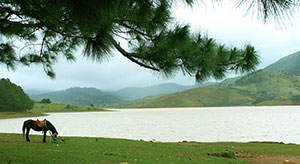 Set in Vietnam’s picturesque Central Highlands, this quiet alpine town boasts cool mountain air, some of the best-preserved French colonial architecture in Indochina, and stunning natural beauty. All year round, the temperature hovers approx 20 degrees Celsius (68 degrees Fahrenheit), making this a favourite destination for outdoor-enthusiasts. Mountain bikers and hikers will be delighted in the area’s trails, as well as in views of pine-covered hills, fruit orchards and lush tea and coffee plantations. 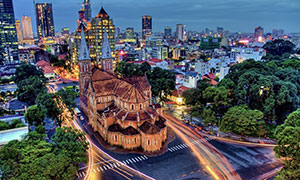 Given a new name as Ho Chi Minh City in 1976, Saigon is Vietnam’s business hub, a city that traffic weaves all around and life seems never stop. There’s a buzz of energy; everyone is buying, selling, building, eating and moving… Beautiful French colonial buildings stand beside newly-built skyscrapers. Women dressed in Vietnam’s traditional aodai tunic stroll past fashionable boutiques and crowded cafes. You’ll find great nightlife and some of the best shopping in Southeast Asia in this vibrant, fast changing city. 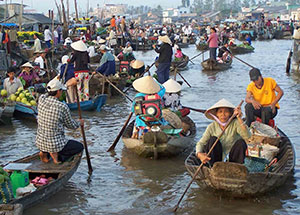 Life in Vietnam very southern is still unfolds as it has for centuries, as farmers cultivate paddy, tend their orchards of tropical fruit, and fish in the rivers and canals that criss-cross this fertile plain. Traveler can explore the region’s myriad waterways by boat, watch rare storks and sarus cranes, visit traditional floating markets where every deals are all in the water and interact with such smiling face of Mekong farmers. 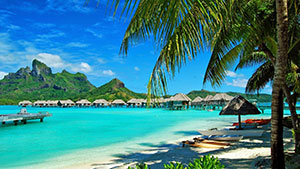 In the blue waters of the gulf of Thailand that close to the coast of Cambodia is the gorgeous island of Phu Quoc. This island is fast becoming a leisure paradise to travelers. Studded by twenty six smaller islands and surrounded with beautiful white sandy beaches and year-round sunshine, PhuQuoc is the truly destination for sun lovers retreat. About 70% of the island is preserved forest, hosting many tropical species of trees and diverse vegetations, much still unexplored. A ride around the island, through the pepper plantations and small fishing villages to watch the fish sauce (nuoc mam) home made in a family factory is an amazing and exotic experience.